This post shows a use in Weka of the SMOreg regressor (Sequential Minimal Optimization) which is an efficient machine learning algorithm for SVM (Support Vector Machine) to implement the approximation of one-variable continuous and limited real functions defined in a range of reals via PUK kernel (Pearson VII function-based Universal Kernel); the objective is to demonstrate that classic machine learning regression can achieve interesting levels of accuracy with extremely short learning times.
Although MLP (Multi Layer Perceptron) type neural networks can be considered universal function approximators (see Fitting with highly configurable multi layer perceptrons on this website), a classic supervised machine learning regression algorithm, like the one presented here, can reach acceptable levels of accuracy and with a significantly lower computational cost than that of an MLP.

In the real world datasets pre-exist the learning phase, in fact they are obtained by extracting data from production databases or Excel files, from the output of measuring instruments, from data-loggers connected to electronic sensors and so on, and then used for the following learning phases; but since the focus here is the regression itself and not the approximation of a real phenomenon, the datasets used in this post have been synthetically generated from mathematical functions: this has the advantage of being able to stress the algorithm and see for which types of datasets the algorithm has acceptable accuracy and for which the algorithm is struggling.

Launch the Weka program of the University of Waikato (New Zealand); in this post the version of Weka used is 3.8.3, but what I said also works with previous versions; Weka requires that the Java runtime is installed correctly.
After the Weka program is launched, the following window appears: 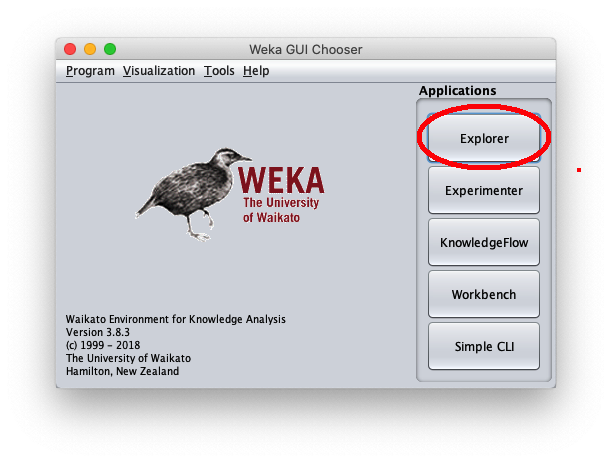 press the Explorer button highlighted in red.
When the Weka Explorer window is displayed: 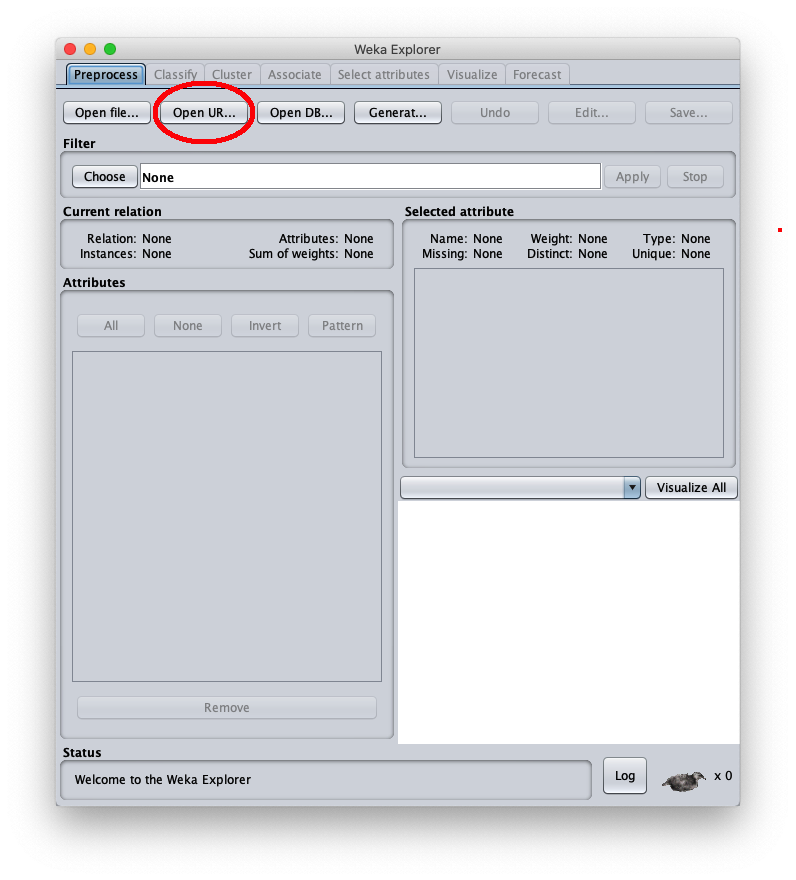 press the Open Url... button, highlighted in red, to load the dataset in .arff format 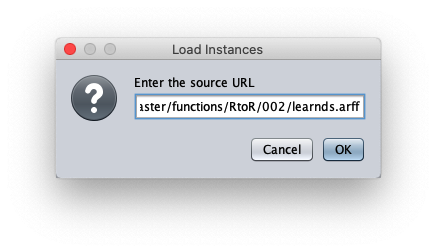 paste the dataset url 002/learnds.arff and press Ok.
The loaded synthetic dataset is generated with the sinusoid function $f(x)=\sin x$ within the interval $[-2 \pi, 2 \pi]$; the Weka Explorer window (located on the Preprocess tab) looks like this: 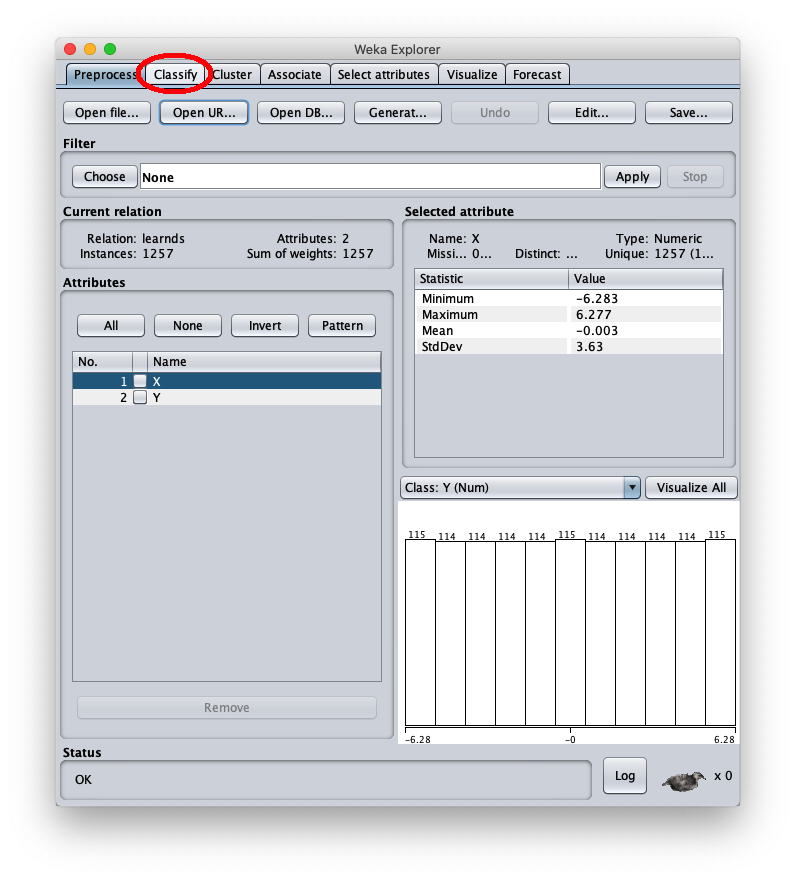 For the purposes of the objectives of this post we can ignore this tab, then open the Classify tab as highlighted in red and the user interface appears like this: 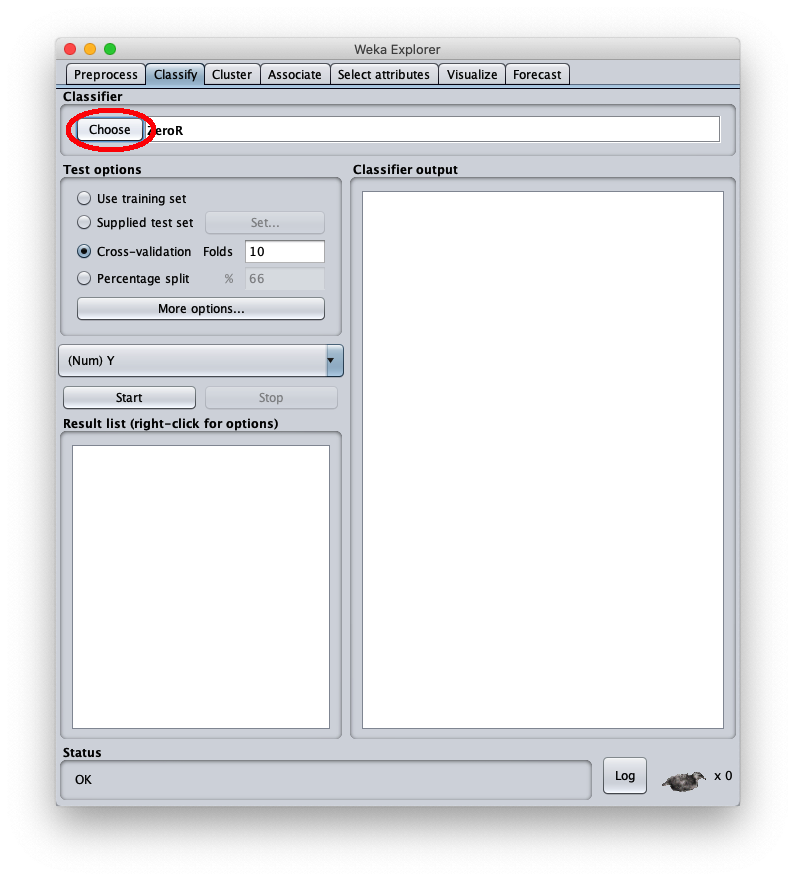 To choose the regression algorithm in question, press the Choose button and this popup is shown on the screen: 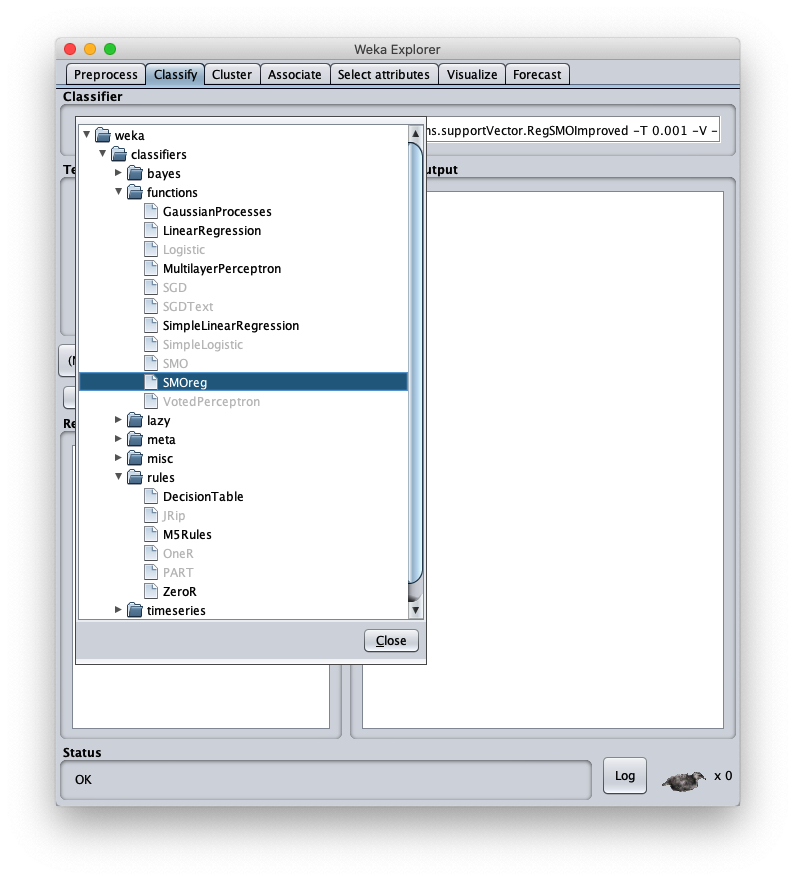 and choose the SMOreg regressor under the functions category; the user interface looks like this: 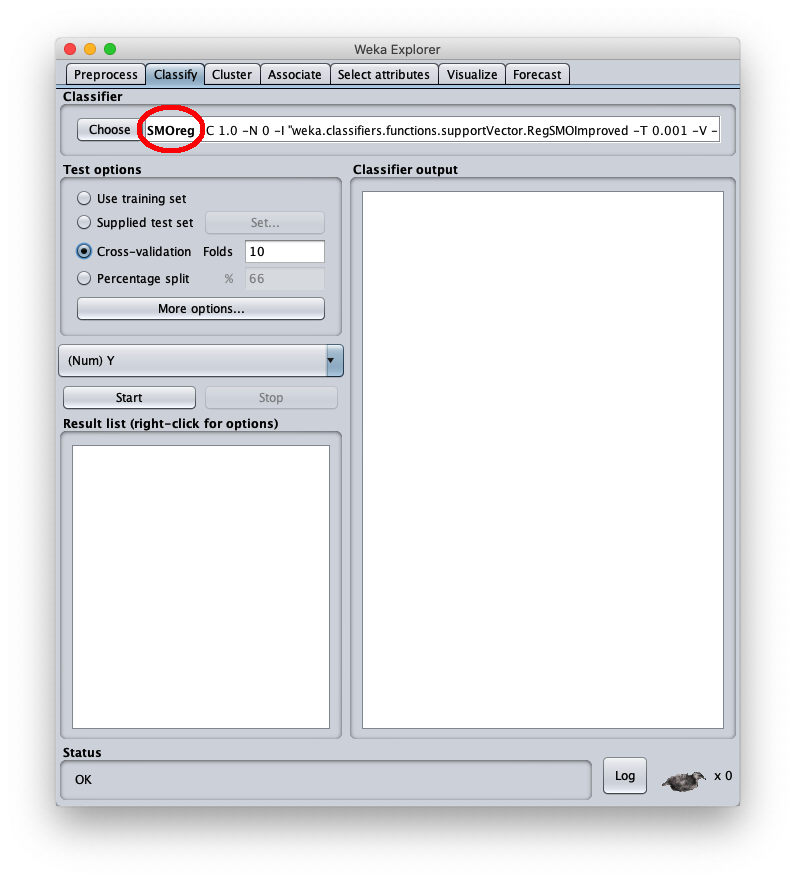 Then press the SMOreg label to configure the parameters of the regression algorithm Sequential Minimal Optimization (abbreviated SMO): 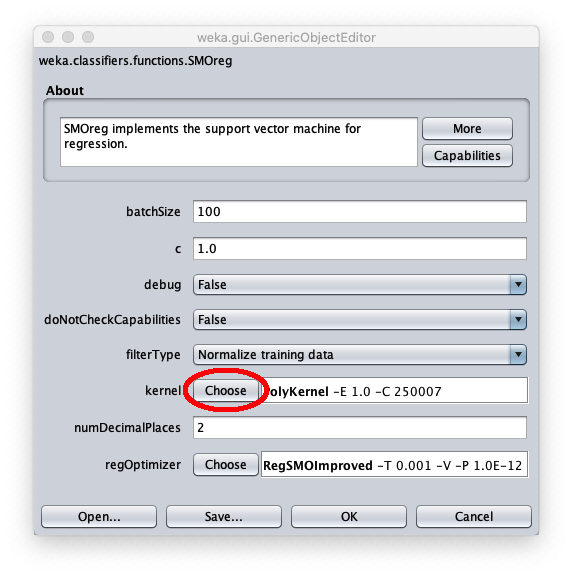 To choose the PUK algorithm press the bottome Choose and this popup is shown on the screen: 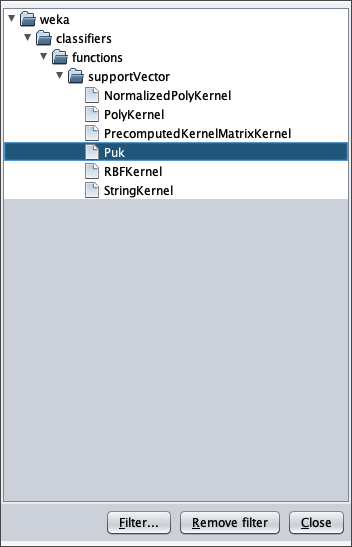 and choose the PUK algorithm and the previous window becomes like this: 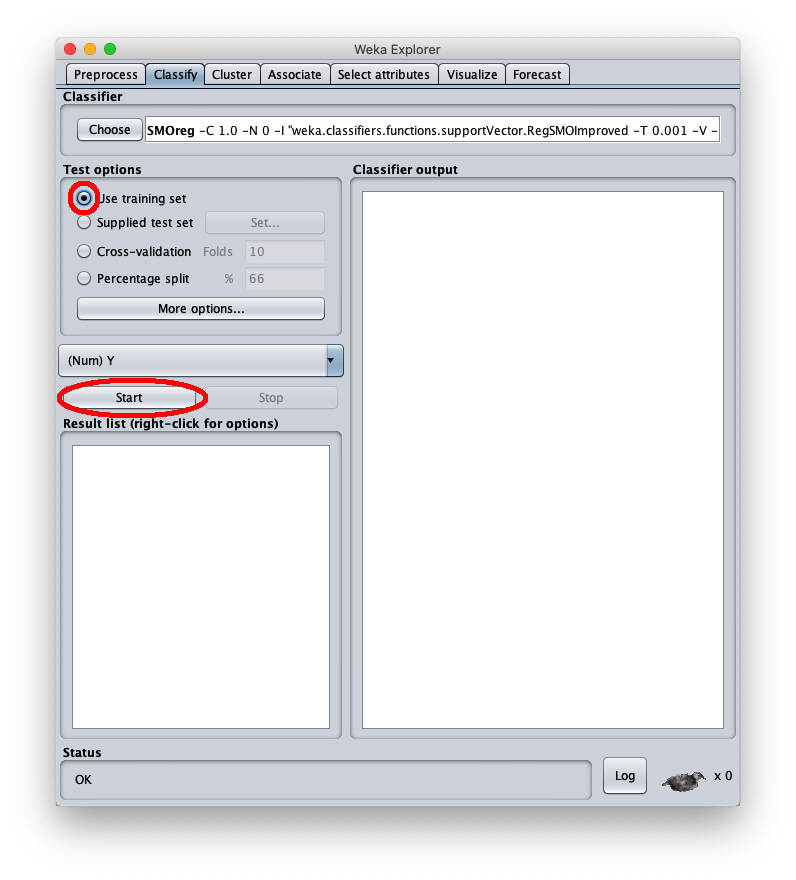 Select the radiobox Using training set to tell Weka to use all the data in the dataset (the learnds.arff file loaded before) for learning, then press the Start button to perform the learning; after a few seconds of processing the right part of the window shows the learning metrics: 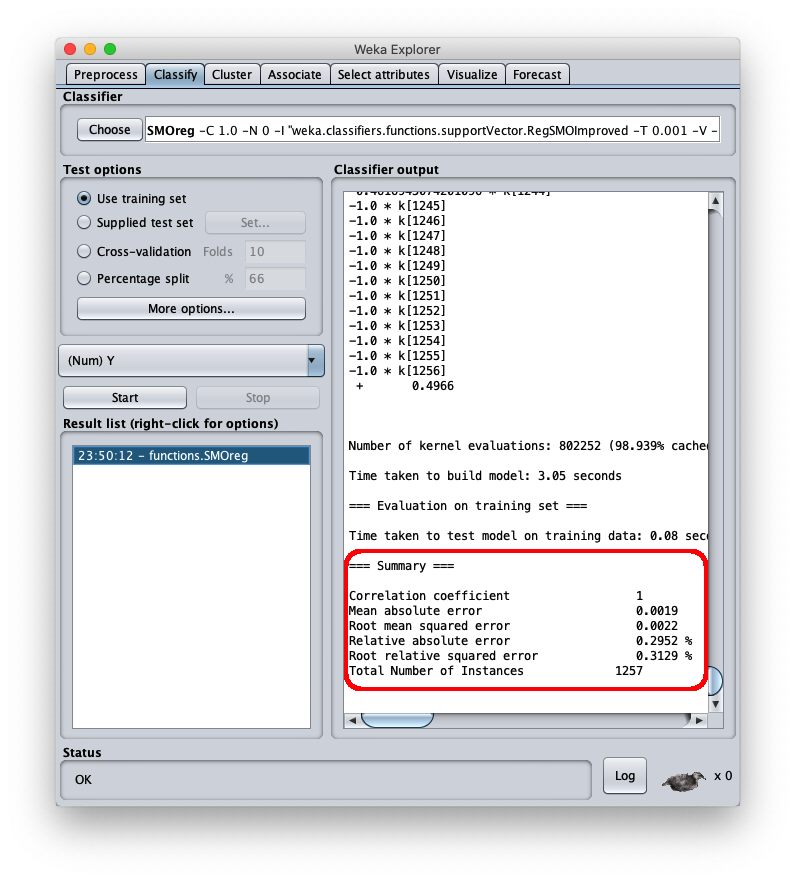 Note that the mean square error is 0.0022, which is a very interesting value.
To apply the test dataset to this newly trained model select the radiobox Supplied test set 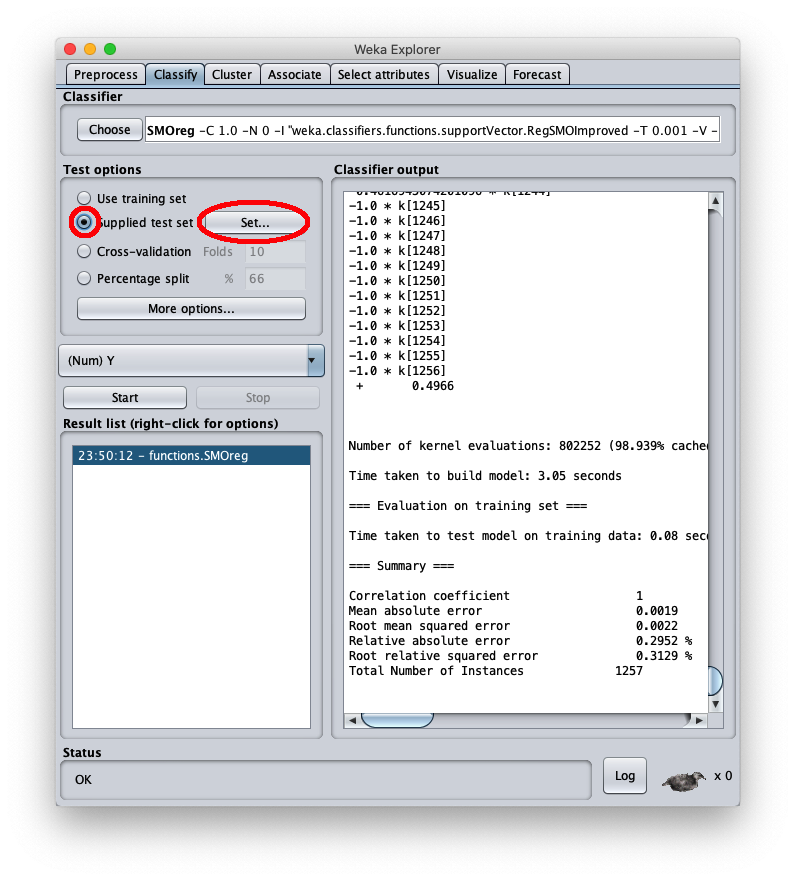 to press the Set.. button as highlighted in red; the following popup is shown: 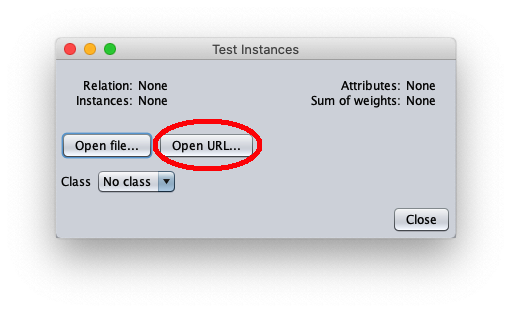 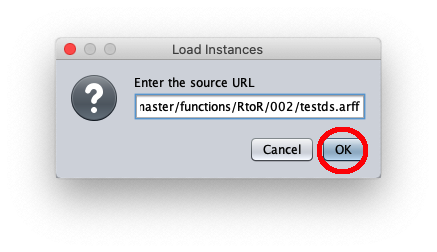 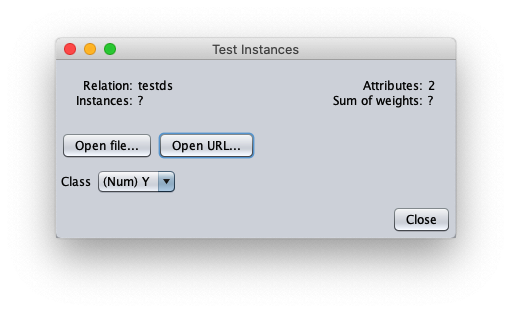 and by pressing Close you return to the Weka explorer window (always in the Classify tab): 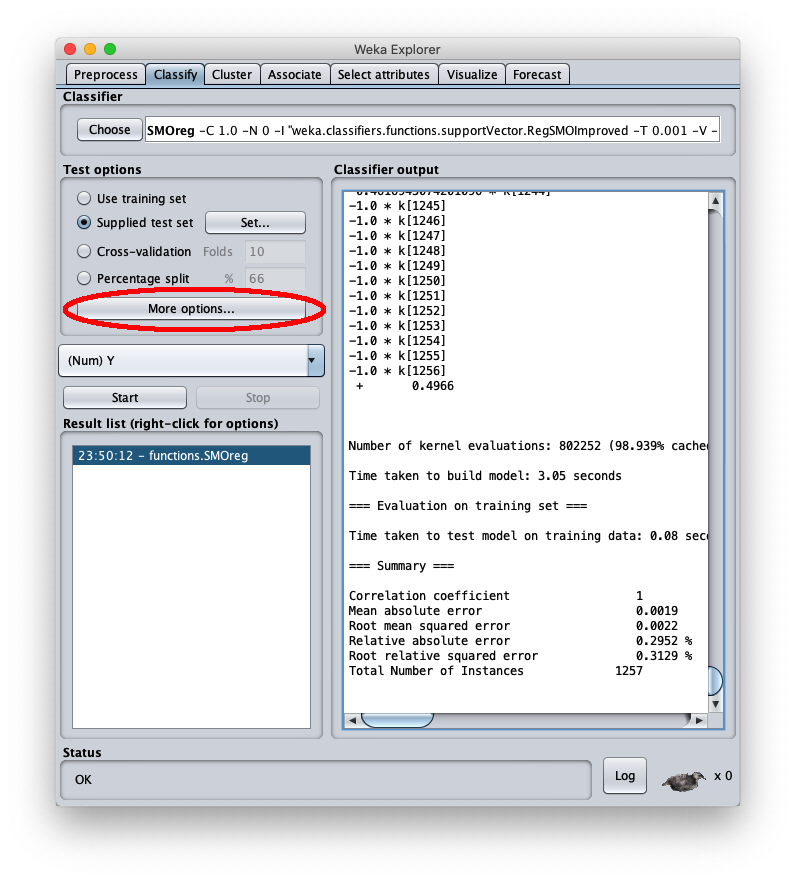 and press the bottome More options... and the following popup appears: 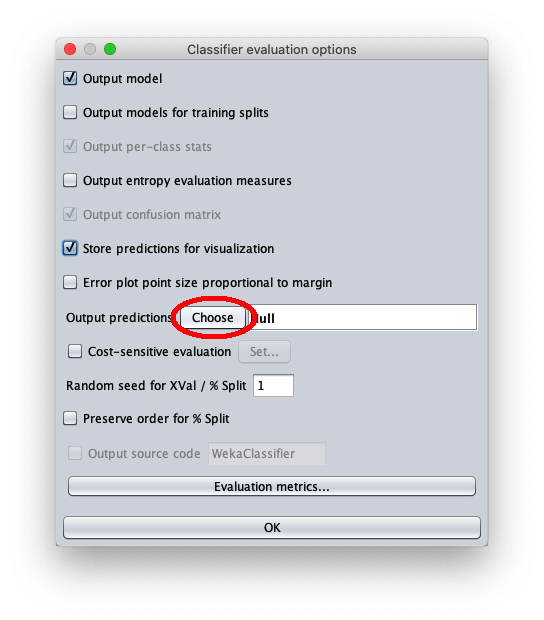 press Choose under Output predictions and the tree popup appears: 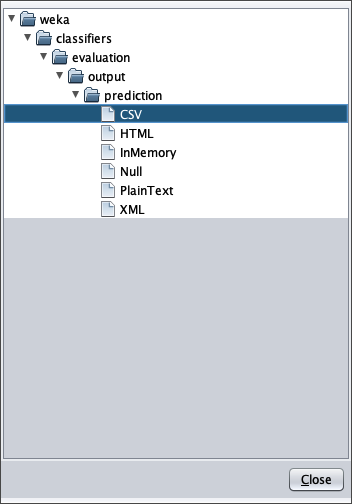 where you have to choose CSV and return to the calling window (the More options): 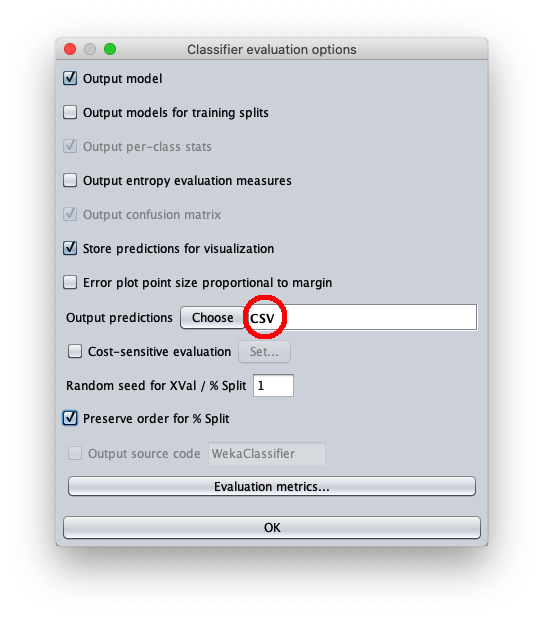 and click on the CSV label to set two options: 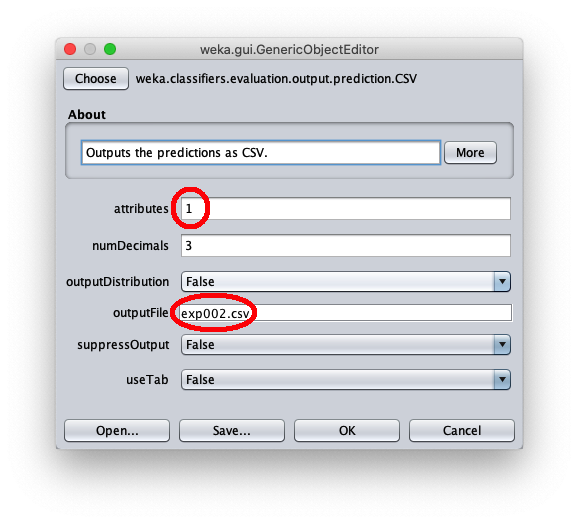 namely: Then press Ok and you return to the Classifier evaluation options window: 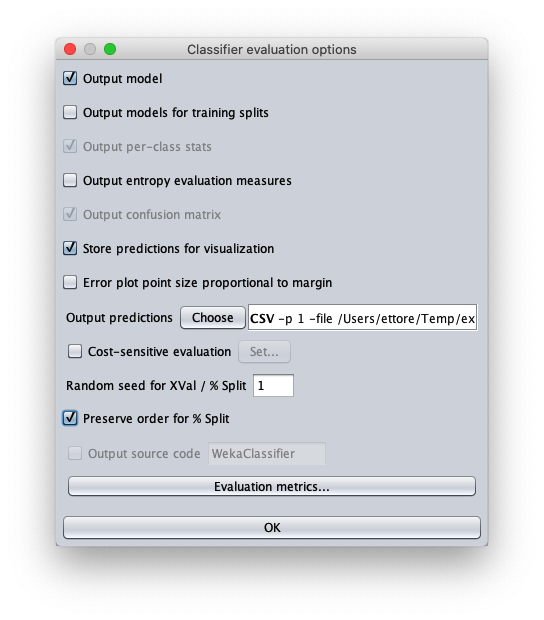 and by pressing Ok you return to the Weka explorer window (always in the Classify tab). 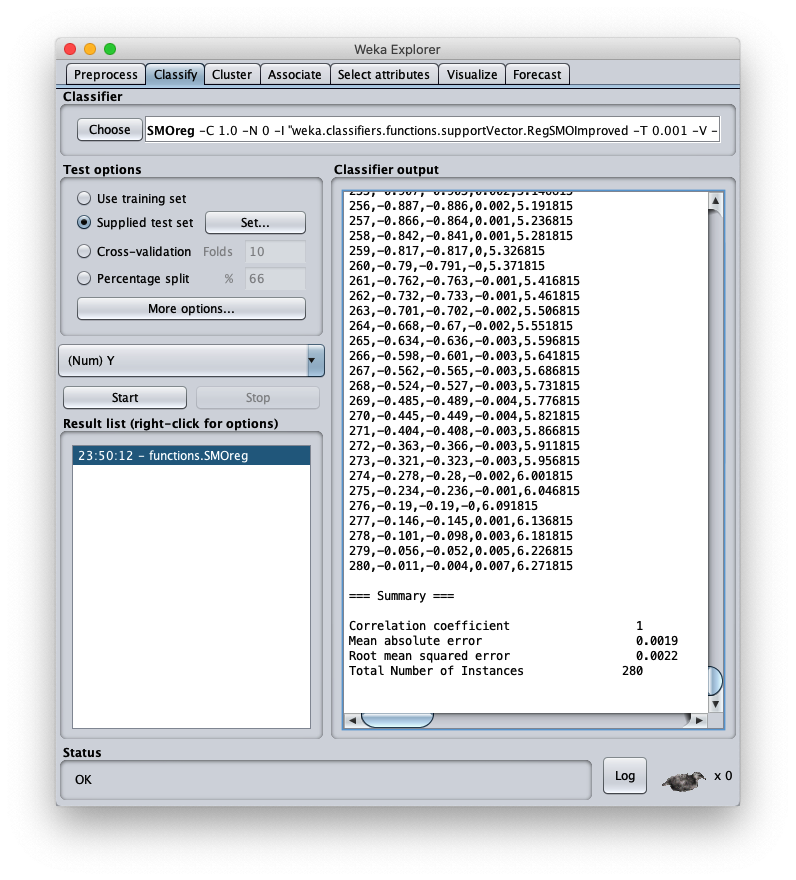 At this point you are ready to apply the test dataset (the testds.arff file loaded first) to the trained model;
press the right button of the mouse on the model and on the menu that opens choose Re-evaluate model on current test set: 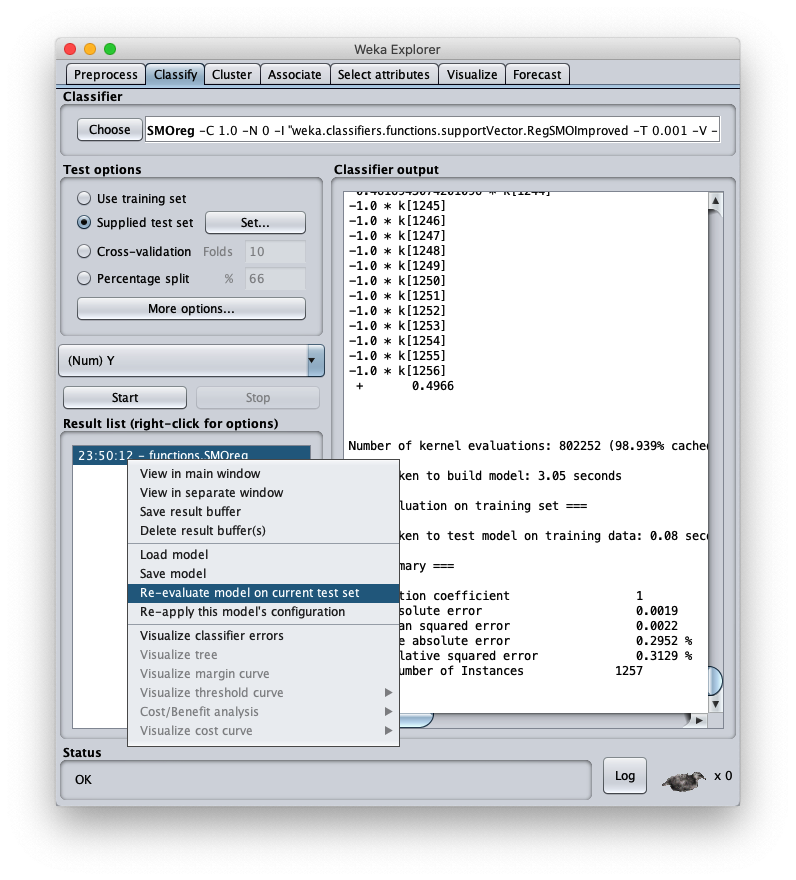 After a few seconds of processing the right part of the window shows the metrics of the test dataset application to the model;
the mean square error is 0.0022, which is a very interesting value; the final part of the csv file is visible in the same area; by scrolling the area you can see the entire csv file, which however has been saved to disk (setting Output predictions). 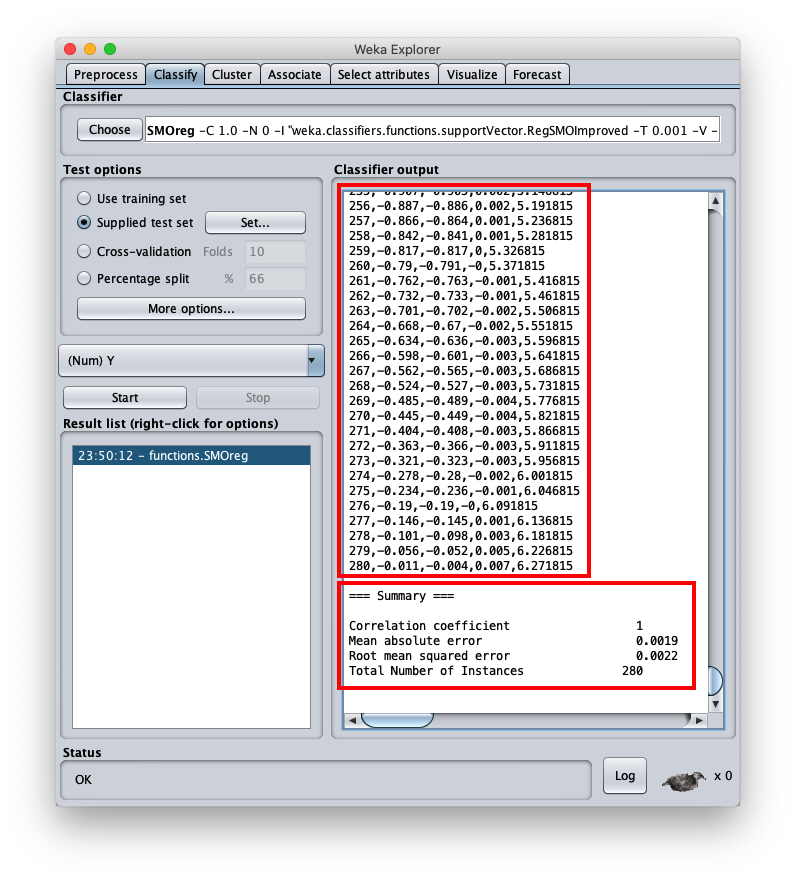 With any system of Cartesian charts from csv files plot the X/Y scatter charts of the pairs:

Microsoft Excel has been used here, but any equivalent software or even an online web service is fine; the result is as follows: 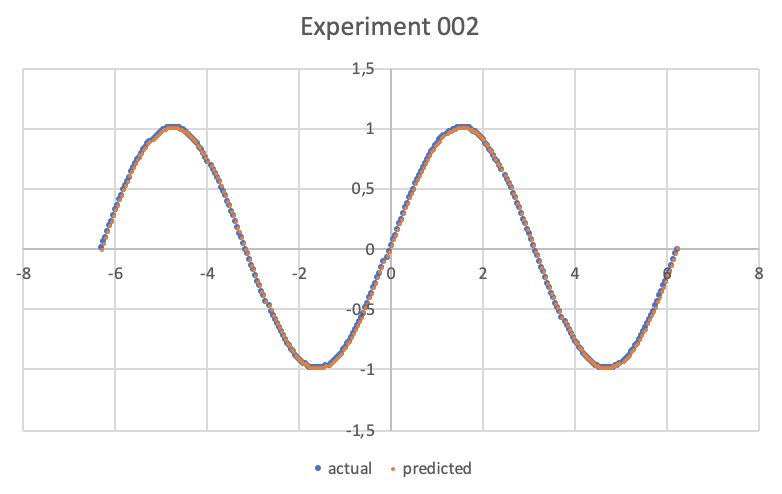 and as you can see the orange dots (the predicted ones) cover almost perfectly the blue dots (the test data), a sign that the regression had an excellent outcome.