This post was inspired by the paper The Lambert W Function Approach to Time Delay Systems and the LambertW_DDE Toolbox and from a math lesson by Prof. Fausta D'Acunzo from Preparation 2.0 about the Lambert W function. The post shows how to solve a particular type of differential equation with delay (abbreviated DDE for Delay Differential Equations) with initial values be given using the Lambert W function; the post does not deal into the underlying mathematics for which we refer to the paper cited above and focuses instead on the implementation in Python 3.x with SciPy of the numerical solution of the scalar case analyzed on the paper itself.

Time Delayed Systems (abbreviated TDS) are systems in which there is a significant time delay between the application of input to the system and the resulting output, and this delay may be inherent or deliberately introduced. A TDS can be modeled with delayed differential equations. This section discusses the case of a scalar coefficient DDE; after formal definitions of the problem and the solution, which makes use of Lambert W function, it is shown the implementation of a Python program with SciPy that realizes the solution proposed by the paper. Finally a verification phase shows the correctness of the solution within the acceptable approximation limits.

The differential problem and its solution

In accordance with the paper, the solution of the DDE is as follows: 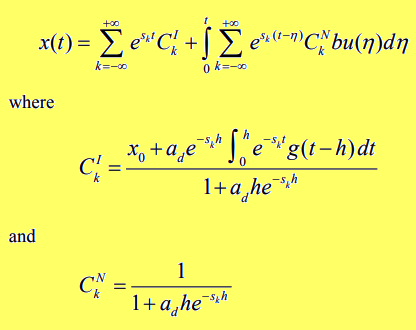 Formal solution provided by the paper, specifically in section 2.3 on page 2.

Formula for calculating $s_k$, specifically in section 2.2 on page 2.

Implementing in Python with SciPy

Two notes are necessary before going into the implementation:

Given the above, the necessary imports are:

there is also the import of matplotlib.pyplot for plotting graphs.

In terms of the naming convention used for variable names, the following two rules were followed: That said, the settings used in this example are:

As it is obvious, in the transition from the continuum of theory to the discretization of the approximate numerical implementation, certain choices are made: also: The code then precalculates the various $s_k$ that will be involved in calculating $x(t)$:

and after the execution of this fragment, the variable SK contains the list of all the various $s_k$ precomputed once and for all. The implementation of $x(t)$ in Python follows:

Note: in the writing of the code it has been privileged the correspondence and the fidelity between the code and the mathematics described on the paper at the expense of some missed optimization and some principles of good programming deliberately left out to make the code more readable.

To perform the calculation of the function $x(t)$ in the interval $t \in [0, 10]$ this line of code is sufficient:

at the end of which the variable x_num_sol is a list containing the discretized values of $x(t)$ in the given interval. Note that the elements of the list are complex numbers with the imaginary part very close to $0j$; should be equal to $0j$ but is not because of the approximations.

To graph the real part and the imaginary part (just to see that it is around $0$) run the following code:

whose execution produces the following graph: 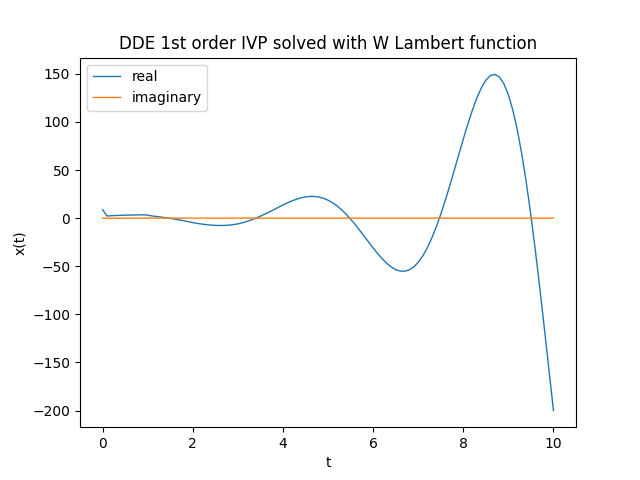 Graph of the function $x(t)$, solution of the equation, calculated numerically

Not having an analytical solution to compare, the verification is not so immediate and requires a double step: one calculates separately the first member and the second member of the DDE and then compares them on the same graph: if the calculations and implementation are correct, the two curves will be practically superimposed. Of course the imaginary part, being practically $0$, is not taken into account in the verification.

To perform the verification calculations run this code:

while the following code plots the graphs of the left and right members:

The graph shows without any doubt the correctness of the implementation in the limits of the numerical approximation: 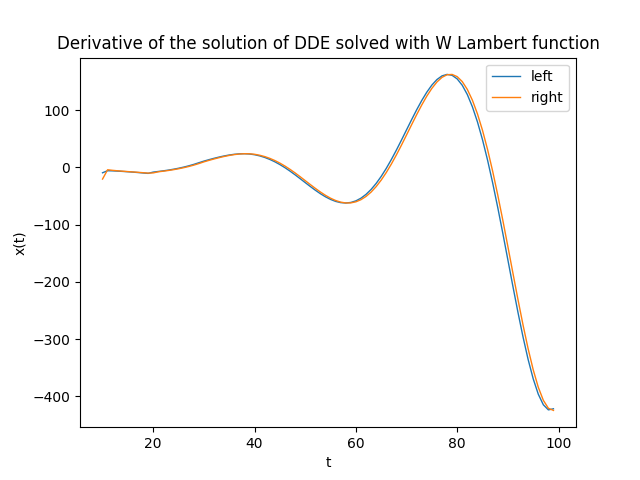 The complete code is available at GitHub.
These materials are distributed under MIT license; feel free to use, share, fork and adapt these materials as you see fit.
Also please feel free to submit pull-requests and bug-reports to this GitHub repository or contact me on my social media channels available on the top right corner of this page.